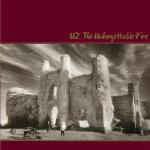 The song's music originated during a sound check before a November 1983 show in Hawaii. The Edge was playing some chord changes, which the group began working with, and there was a rhythm mistake the group liked and repeated. U2 concert engineer Joe O'Herlihy was taping the whole thing.

The song's lyrics also came from a change. Lead singer Bono was trying to write a song about Ronald Reagan and had the title “Pride.” It wasn't working, though. Then the band visited the Chicago Peace Museum and was impressed by an exhibit about Martin Luther King.

Chrissie Hynde of the Pretenders sings backing vocals but is credited on the album as Mrs. Christine Kerr (at the time she was married to Jim Kerr of the band Simple Minds).

“Pride” was the first single from The Unforgettable Fire, in advance of the album release.

The original 45-rpm seven-inch single had a picture sleeve. On the back was a picture of King, with a quote from him: “Hatred and bitterness can never cure the disease of fear; only love can do that. Hatred paralyzes life; love releases it. Hatred confuses life; love harmonizes it. Hatred darkens life; love illumines it.”

The flip side of the single was a non-album instrumental, “Boomerang II,” which wasn' t on the CD.

The song was U2's first charting hit in America. It spent five weeks in the Billboard Top 40 beginning on December 1, 1984 and peaked at Number 33, laying the groundwork for the group's overwhelming success with its following album and singles.

In the U.K., where the band was more established at that time, the song reached Number Three in spite of its American subject matter, and the album was the band's second straight Number One.