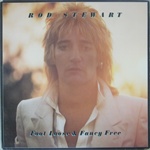 ‘You’re In My Heart (The Final Acclaim)’ – Rod Stewart

The first single from Rod Stewart's Foot Loose & Fancy Free album, “You're In My Heart (The Final Acclaim)” reached Number Four on the Billboard Hot 100 and Number Three on the U.K. pop chart. It was also certified gold.

Stewart recalled that the song was written after he had already started working on the album: “I was standing around outside the Hyatt Regency Hotel in Toronto…with my producer Tom Dowd when the chorus hit me like a bolt of lightning. 'Tape recorder!' I yelled. 'Ain't got one,' said Tom. 'Christ,' I said. 'What the bloody hell we gonna do?' 'Sing it anyway, and I'll write the chords and melody on this cigarette packet,' said Tom. And so I started to sing in full voice at 10 o'clock in the morning with many bemused onlookers. A song was born.”

Foot Loose & Fancy Free was one of Stewart's most successful albums, reaching Number Two on the Billboard 200 and selling more than three million copies — his top seller up to that point.

The album reached Number Three in the U.K.