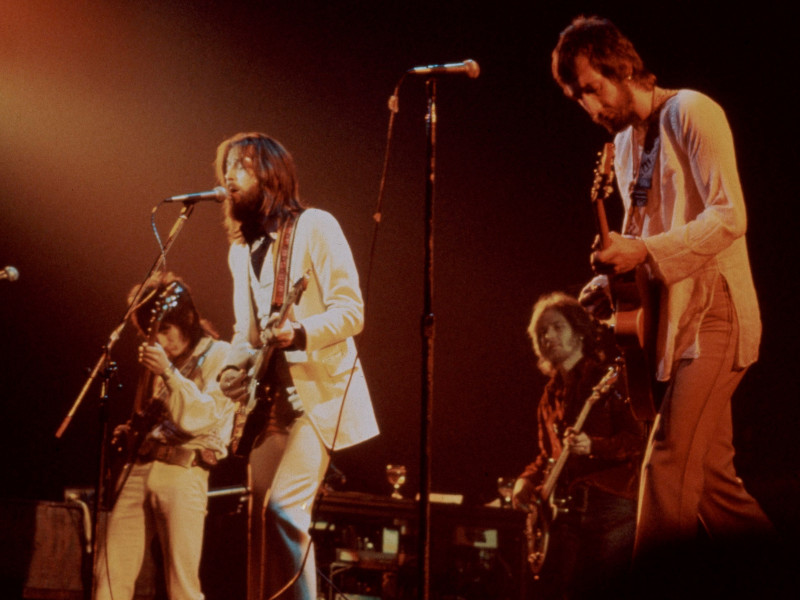 It was 50 years ago tonight (January 13th, 1973) that Eric Clapton performed his legendary comeback concerts at London's Rainbow Theatre. The two concerts were organized by the Who's Pete Townshend in an effort to coax a deeply heroin addicted Clapton back into the spotlight for a pair of shows featuring Clapton, himself, Steve Winwood, Ron Wood, Jimmy Karstein and Traffic’s Jim Capaldi on drums, Blind Faith’s Ric Grech on bass, and percussionist Rebop Kwaku Baah.

Clapton's Rainbow shows featured a cross section of tunes from "Slowhand's" stints in Cream, Blind Faith, Derek & The Dominoes, and his one solo album, 1970's self-titled collection. The star-studded backing band was jokingly announced at the concerts as "The Palpitations."

Eric Clapton's Rainbow Concert was released on September 10th, 1973 and peaked at Number 18 on the Billboard 200 album charts. A fully remixed and expanded version of the album was released in 1995 featuring different performances and edits than the original 1973 release.

Ron Wood revealed to us that legendary jam sessions between him, Clapton, Townshend, and Winwood have remained unheard for decades, and took us back to the early days of rehearsing the shows at his legendary London home "The Wick": ["Yeah — oh, they were magic. That was about ’73, wasn’t it? It was a very special time with rescuing Eric from his. . .  he was really down in the dumps from his drugs, y’know? And Pete Townshend and I gettin’ him up into London and then getting’ him over to my house, The Wick, and gathering the musicians, like, Stevie Winwood. It was a really special rehearsal time. And backstage at The Rainbow, I remember meeting George Harrison for the first time, him and (his wife) Pattie (Boyd) — and very special memories from those days.”] SOUNDCUE (:37 OC: . . . from those days

Surely, with a fully functioning studio in "The Wick," we pressed Wood if he remembered if the rehearsals and jams being committed to tape: ["Yeah, there were some tapes running. I think Bob Pridden, the Who’s roadie may have been involved at the time. . .  Yeah, ‘cause of Pete’s involvement, I’m sure. Maybe if I asked him there would be some tapes. I seem to remember some rehearsal cassettes from the time; although whatever happened to them, they’d be worth following through (with), ‘cause there were some magic rehearsals.”] SOUNDCUE (:24 OC: . . . some magic rehearsals)