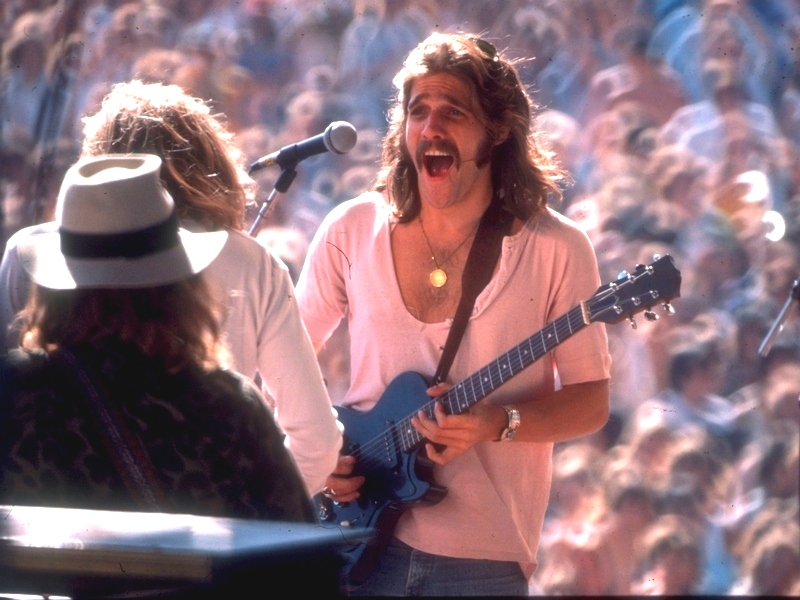 The album's themes reflected the state of America through the decaying Los Angeles rock scene, which by the mid-'70s had changed from an earnest singer-songwriter community into a far more decadent lifestyle fueled by celebrity, money, and drugs.

In their original review of the album, Rolling Stone commented on Hotel California's music and its reflection of its creators by saying, "Hotel California showcases both the best and worst tendencies of Los Angeles-situation rock. . . Its lyrics present a convincing and unflattering portrait of the milieu itself."

Years later Henley reflected on the album, telling Billboard, "Every band has their peak. That was ours."

Don Henley explained what it was about the Eagles' music that registered so deeply with their fans: ["I think a lot of it has to do with timing. I think these songs came along at a time in people's lives when they were becoming adults, or, y'know, going through a certain period in their life, their lives. And, y'know, there's a cliche about songs being 'the soundtrack' to people's lives and things like that, but I would imagine that there are a lot of different reasons for that and we don't have a clue."] SOUNDCUE (:21 OC. . . have a clue)

Songwriter J.D. Souther recalls co-writing "Victim Of Love" with Henley, Frey and Don Felder: ["I came in late on that one. They had the track done. That was Don Felder's track, I think. And that was one of those — they were in Florida at Criteria (Studios) cutting the album, and it was 'J.D., get down here (laughs), we've got a couple of songs that aren't finished.' That happened a couple of times. That happened on that album and The Long Run album. But I think at that time we finished 'New Kid In Town' and we wrote the lyrics to 'Victim Of Love.'"] SOUNDCUE (:23 OC: . . . Victim Of Love)

Former-Eagles guitarist Don Felder recalled how he wrote the timeless introduction to the Eagles' 1976 chart topper, "Hotel California": ["I was sitting on the beach in the house I'd rented in Malibu; I had this acoustic guitar — it was this beautiful July day, my kids were playing in the sand and the beautiful California sun was glistening on the water. I was just tinkering away on this guitar and out came that introduction to the song, and I played it three or four times over and over. And I said, 'I have to record a little bit of this before I forget it.' So, in my back bedroom — one of my daughter's bedrooms, I had this old reel-to-reel tape recorder and microphone. I ran back there and turned it on and sit and played a couple of times through that progression and turned it off went out and played on the beach. And we were in the process of writing songs for the Hotel California album and I'd started to compile a reel of 15 or 16 other song ideas. So I went back and listened to that introduction about a week later and said, 'I think I'll finish this.'"] SOUNDCUE (:47 OC: . . . I'll finish this)

Not long before Glenn Frey's 2016 death, he explained the Eagles never took for granted that they were able to stay true to their art while selling mass quantities of albums: ["We work in a funny business, where we merge art and commerce. Sometimes, y'know, unfortunately, we celebrate success more than we celebrate art, so I think you have to put it in perspective. That is a testimony to the longevity of the band, and that is very flattering. I don't think that's something you can plan for. It's all icing on the cake for us these days."] SOUNDCUE (:18 OC: . . . us these days)

Hotel California went on to top the charts for eight nonconsecutive weeks, and is now the third best-selling album of all time, having been certified 26-times Platinum by the RIAA for sales and streams of more than 26 million copies.

The collection is housed in an 11-by-11 hardbound book, featuring "rare and unseen photos from the era, a replica tour book, and an 11-by-22 poster." Both a two-CD expanded edition and single disc version are also available, along with digital download and streaming versions.