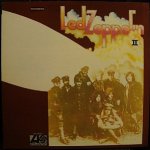 Jimmy Page's guitar riff for the song was used for the BBC 2 music show Disco 2.

The "Moby Dick" that appears on Led Zeppelin II was edited down from a much longer jam that Bonham, Page, and bassist John Paul Jones worked on at Mirror Sound in Los Angeles.

"Moby Dick" became a highlight of Led Zeppelin concerts, with Bonham extending the solo to 20 minutes and beyond — so much so that for the 1977 tour, it was renamed "Over The Top."

The Led Zeppelin II album hit Number One on the Billboard 200 chart and has been certified 12-times platinum.