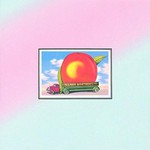 ‘One Way Out’ – The Allman Brothers Band

"One Way Out" was originally written and recorded by Mississippi blues great Elmore James, also known for his hits "Dust My Broom" and "Shake Your Money Maker." James is also known as a seminal influence on a generation of rock & rollers such as Eric Clapton, Jimmy Page, and Jeff Beck, as well as the Allman Brothers Band.

The Allmans covered "One Way Out" during their live shows, recording their best-known version of it during the same 1971 shows that produced the landmark At Fillmore East live album.

The rendition of "One Way Out" that appears on Eat A Peach is a relatively short 4.58 — like most of its repertoire, the group could stretch the song, and the version that appears on the Dreams box set, which was recorded in 1973, weighs in at nearly eight minutes.

The Eat A Peach double album combined leftover tracks from the At Fillmore East shows with some new studio tracks, including favorites such as "Melissa" and "Blue Sky."

Eat A Peach reached Number Four on the Billboard 200 and sold more than a million copies.

Eat A Peach was also the group's last album with guitarist and founder Duane Allman. He died in a motorcycle accident on October 29, 1971, after the studio sessions for the album were held.