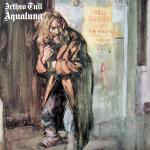 According to rock legend, most of the songs on the first side of Aqualung, including the title track, were inspired by the observations of Ian Anderson's first wife, Jennie, on British street people. Aqualung's second side, which includes “Locomotive Breath,” was often described as Anderson's anti-church, pro-God statement.

During that time, Jethro Tull's lineup was in a fairly constant state of flux — reportedly due to Anderson's frugality and unwillingness to share song royalties with anyone except the band's producer and manager, Terry Ellis.

“Locomotive Breath” peaked at Number 62 on the pop chart.

Anderson says the runaway train crash in “Locomotive Breath” is a metaphor for life. “It's an analogy of the unending train journey of life. You can't stop. You've got to stagger on.”