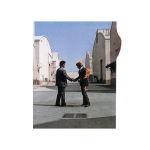 ‘Welcome To The Machine’ – Pink Floyd

“Welcome to the Machine” presents a dark, cynical view of the music industry, likening it to a soulless machine, similar to another song on the album Wish You Were Here, “Have a Cigar.”

The song was inspired by Pink Floyd's experience with Columbia Records, which lured it away from the EMI conglomerate after The Dark Side Of The Moon album. Columbia paid the band a then-unheard-of $1 million to sign.

Pink Floyd's members usually refer to this as “The Machine Song.”

The song's unique sound was created by a VCS3 synthesizer that Roger Waters favored.

During the recording of Wish You Were Here, Syd Barrett — Pink Floyd's founder, who was booted from the band in 1968 due to drug-induced emotional problems — showed up unannounced. The band hadn't seen him in seven years, and they didn't immediately recognize him. Ironically, the group was recording the song “Shine On You Crazy Diamond,” which paid homage to Barrett.

The recording of the album was also made more difficult by personal problems. Waters and drummer Nick Mason were both going through divorces at the time.

Guitarist David Gilmour and keyboardist Rick Wright both say Wish You Were Here is their favorite Pink Floyd album.

Wish You Were Here went to Number One on the album charts in both the U.S. and the U.K. It has sold more than five million copies since its release.

Shortly after Pink Floyd finished recording the album, it headlined the Knebworth Festival in England, using quadraphonic sound and a replica of a Spitfire airplane that crashed into the stage during the show.