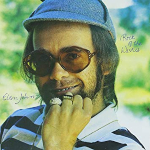 Recorded: June and July 1975 at the Caribou Ranch in Nederland, Colorado

“Island Girl” spent three weeks at Number One on the Billboard Hot 100 chart in November 1975. It took over for Neil Sedaka's “Bad Blood,” which was released on Elton John's Rocket Records label and featured John on backing vocals.

“Island Girl” was John's third Number One single of 1975 and his fifth chart-topper overall.

Rock Of The Westies, John's second album of 1975, hit Number One on the Billboard 200 chart and was certified platinum.

Rock Of The Westies was initially going to be titled Bottled And Brained.

The album introduced John's new band, retaining longtime guitarist Davey Johnstone but jettisoning the rhythm section of bassist Dee Murray and drummer Nigel Olsson. Some of the new band members had been working with John since his Caribou album in 1974, however.