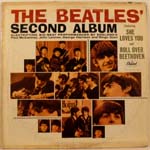 ‘She Loves You’ – The Beatles

John Lennon and Paul McCartney composed "She Loves You" on June 16, 1963, following a performance in Newcastle while touring with singer Helen Shapiro.

Lennon recalled that "It was written together…I remember it was Paul's idea–instead of singing 'I love you' again, we'd have a third party."

Among the song's signatures is the jazzy guitar chord that ends the song. McCartney credits George Harrison with the idea but says producer George Martin fought it: "Occasionally we'd overrule (Martin), like on 'She Loves You,' we end on a 6th chord, a very jazzy sort of thing, and he said, 'You can't do that! A 6th chord? It's too jazzy.' We just said 'No, it's a great hook, we've got to do it.'"

McCartney's father, meanwhile, suggested that the group sing "yes, yes, yes" instead of "yeah, yeah, yeah" because it would be more "dignified."

Lennon remembered that the song's "woo woo" portion was taken "from the Isley Brothers' 'Twist and Shout,' which we stuck into everything–'From Me To You,' 'She Loves You,' they all had that 'woo woo.'"

"She Loves You" is the only song the Beatles performed twice on The Ed Sullivan Show, on February 9 and 16, 1964. A clip of the group performing the song also aired on The Jack Paar Show on January 3, 1964.

"She Loves You" was a Number One hit in the U.K. in September 1963, topping the charts for four weeks. It was also the best-selling single in U.K. history until McCartney & Wings' "Mull Of Kintyre" in 1978.

However, the Beatles' U.S. labels, Vee Jay and Capitol Records, did not initially want to release "She Loves You" as a single here. The group's manager, Brian Epstein, prevailed upon a smaller label, Swan, to put it out first.

After "I Want To Hold Your Hand" broke open doors for the Beatles in the U.S., Capitol released "She Loves You."

"She Loves You" never appeared on a British Beatles album but was included on the U.S.-only release The Beatles Second Album, which hit Number One on the Billboard 200 in the spring of 1964 and sold more than five million copies.